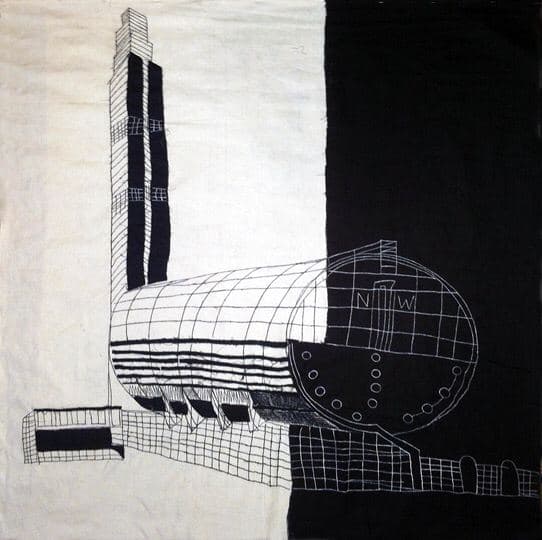 For Arendt becoming an artist wasn’t a challenge in the way it is for many – she comes from an artists’ family where creative thinking was the norm. She chose to specialise in the profession of embroidery, starting her career with orthodox icons. But her work has grown, gained confidence, speed, and experimental audacity. Instead of filling the shoes prescribed to a craftswoman she uses the medium to challenge its stereotypes on the one hand, and gendered creative professions more broadly. She doesn’t even see her own work as craft, but as contemporary art - monumental drawings with thread on fabric. She now wields her needle over icons of an altogether different calibre – colossal male monumentalists of modernism and the avant-garde. Both reverent and provocative, formalist and conceptual, she threads together a story, an embroidered conversation between herself, audiences, her artist ancestors, artistic idols and craftspeople around the world.

Current themes of Maria Arendt's work are classic “symbols” of 20th century Russian avant-garde architecture which she interprets in a medium that would appear at odds with architecture - embroidery.
As curator Ekatherina Inozemsteva talks over her works: “Perhaps it’s an expression of utopian thinking on her part too; her fabrics could be likened to the netting which in Russia always envelops buildings under construction. Like a temporary drape, her embroideries give a glimmer of hope that beneath them lies a reality akin to the one which Tatlin, Melnikov and the Vesnins had envisaged.” In 2008 the State Museum of Architecture in Moscow held the duo show of Maria Arendt together with her sister Natalia. Maria’s works entered museum collection.

Since 2009 Maria Arendt participates in Moscow Biennale of Contemporary Art. In 2014 she took part in the group show “Actual drawing” in State Russian Museum with the work “Shukhov’s Tower”, which was placed on the cover of exhibition catalogue.